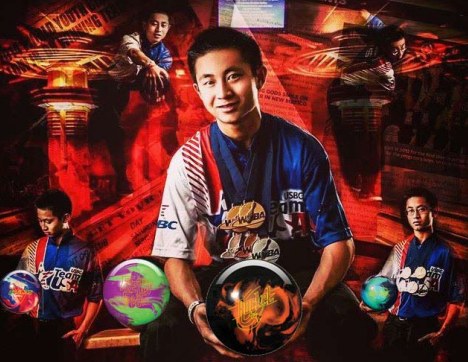 PALMDALE — Not many people can say they’ve made a name for themselves before their 18th birthday, but Wesley Low sure can. Low, who just turned 18 in April 2015, inked Storm Staff Member and Youngest Bowler to Ever Win a Regional on his resume before ever cracking open a college textbook.

His raw talent, however, is not what stands out most about Low. In a world where two-handed bowling is becoming more and more prominent, he adds one unique twist – he does it from the left side. It’s a style that Storm president Dave Symes calls a “rare breed” in bowling for the time being and makes Low a, “once-in-a-lifetime type of athlete.”

One of the most easily recognizable bowlers to step on the lanes right now, Low took some time to talk about how he balances being a potential future “face of bowling” according to Symes and just a regular teenager who wants to make his dad proud.

Michelle Montgoris: Talk about being a staff member so young and what it means to you to be a part of Team Storm.

Wesley Low: Being a staff member so young is an honor and a privilege because most people don’t get on staff until later in life. At 18 it’s cool because you have a company [Storm] that cheers for you and wants to build you up as a bowler. Now I can say I’m living every kid’s dream. I think the people…they’re just really genuine people, they care for the game, they care for their bowlers, and they want to see the sport grow. That’s what attracted me most – the hospitality.

MM: What is your daily routine like? You spend a lot of time traveling and competing, how does it fit in with school and your studies?

WL: The struggle in high school was being able to have the time to practice. I went to school right up until 3 p.m. and either went home to nap or went to practice or went to do homework all day. My practices were based on how much homework I would have every night so there wasn’t a real routine, it was just whenever I had open time I’d try and take advantage of it. I bowled tournaments pretty much every weekend and I had time periods where I would struggle but didn’t know why, so I would take that to the next session to try and figure out something different. I think the big thing was it took me months to figure that out.

MM: How old were you when you decided you wanted to pursue bowling professionally?

WL: When I first made the junior team; that was a big deal to me in 2013 because I always loved bowling, it was something I liked doing and I wanted to keep bowling regardless of how good or bad I was doing, but that was a confidence booster. Now I’m with the best youth bowlers in the nation and I’m part of this one team. That kind of started making me strive to want to be a better bowler. The people you meet are a family and in bowling it’s a very small world so everyone basically is your family. The way they treat you is something like I don’t think any other sport offers – whether it’s your competitor or your best friend you’re going to be close after you’re done bowling. Team U.S.A. offered that special bond.

MM: You’re part of a growing group of two-handed bowlers, with Storm’s recent signing of Shawn Maldonado. Why do you think that style has become more popular as of late? How did you become a two-handed bowler?

WL: I think it’s become popular because people are seeing how successful Jason Belmonte is becoming and it’s starting a new trend. Younger kids see him and say that he’s the number one bowler and there has to be a reason for it; they feel like two-handed gives them a better chance of improving their game. Right now I’m 5’8” and 120 pounds, and I started bowling when I was 2 so I probably weighed about 20 pounds and I was shoving a six pound ball down the lane with two hands and my dad didn’t really care how I bowled [laughs]. As I got bigger I still shoved a six pound ball with both hands, and my dad always said to ‘just do whatever you have to do as long as you’re able to bowl.’ And as the U.S. found out more about Belmo, I had someone to look up to.

MM: You became the youngest bowler ever to win a PBA Regional event back in March of 2013. What do you remember most about that match?

WL: I don’t think it got to me until the eighth or ninth frame because the match was close all the way, and I remember thinking, ‘oh my goodness, I have to stay on the gas pedal and keep striking or else I’m not going to win.’ I think [Deeronn Booker] split in the eighth frame and that’s when I realized, ‘wow… I just won a PBA Regional.’ I’m not one to celebrate on the lanes but I know I smiled after my shot in the eighth or ninth and I was kind of relieved because that was a goal my dad had for me, to win a regional and break Pete Weber’s record at some point [Weber set the record for being the youngest bowler ever to win a regional in 1979, a record that stood for 34 years]. It was a relief because my dad was proud of me, I did something he wanted me to do.

MM: Who would you say has been your biggest influence to this point?

WL: The first 10 years of my bowling career my dad was my coach; he would always look up bowling balls, he was always talking about my spare game and helping me learn how to line up on certain patterns. He would do research on just about everything to help me get better. Then I went to Mark Baker, because my dad just didn’t know how to fix the physical part of my game so we ended up going to Mark. But my dad would still do the research on lane play ideas and bowling balls. I think that was pretty big because not a lot of people have that guidance to really help them get better.

MM: What does it mean to you to be a part of Junior Team U.S.A.?

WL: It’s an honor just to be able to say you represent your country. It’s humbling to see the world and how people live differently from us here in the states and to see that they don’t always live in the same conditions that we do.

WL: Norm Duke – I loved his spare game; you always hear about how ‘perfect’ he is. And I love his demeanor on the lanes, it’s like, ‘I’m just going to go out here and bowl and have a good time regardless of what happens,’ and you can see that watching him on television; he’s just kind of relaxed, he’ll chat while he’s bowling and I think that’s something that was always pretty cool to me. And of course his bowling – he’s very versatile. MM: Your career is just starting, but what goals, if any, have you set for yourself? WL: I have not set any yet; I’ve just been thinking about finishing college before I go out on Tour. As of right now [my major] is general business. I don’t really know what I want to do in life but I feel like general business is something that’s in every industry regardless of what you plan on doing; business is something that goes into everyone’s life.

MM: Have you received any advice that really stuck with you?

WL: I did, from Rhino Page actually. I was bowling a tournament where he was basically our team coach and he told us to remember something along the lines of, ‘I’m me. I should be able to do whatever I want on the lanes because I can do so many more unique things, and if someone were to tell you to play this specific part of the lane you have to stand up for yourself and say, ‘no, I don’t like this idea for me; I’ll try it but if it doesn’t work it probably isn’t the best place to be.’’ That’s helped me later on – I’ll take other people’s feedback but I like to see things for myself. It’s one of the biggest things I’ve learned.