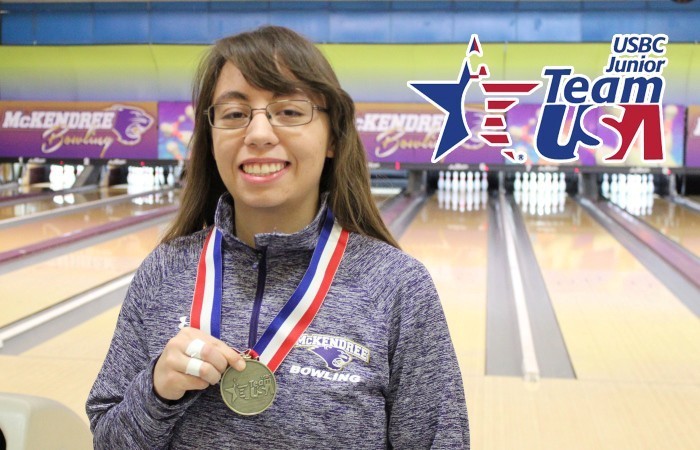 Dunn, who has been making a mark on the Bearcats’ bowling program in the first half of her freshman season, battled her way through a field of more than 100 competitors and five rounds of qualifying that was held Jan. 3-7 in Las Vegas, Nev. She was among the top bowlers throughout the week-long event, and was named to the 10-member squad by the National Selection Committee based on her performance.

“It was an awesome experience,” said Dunn. “I went into the week with an open mind and it helped that I got off to a good start right away. That really helped my confidence the rest of the tournament. I’m proud to be a part of Junior Team USA for the coming year.”

While Dunn admitted that the pressure and length of the event made her nervous at times, she credited McKendree teammate Sarah Wille (Hoffman Estates, IL/Hoffman Estates) – who was also competing in the qualifying rounds – with being a calming influence on the lanes.

“I bowled next to Sarah just about all week and that really helped keep my nerves down,” said Dunn. “Having someone next to you that you know in a different environment certainly helped. It gave me someone to talk to and share ideas about shots. It was especially big on the last day. Sarah was right there and helped me get through those last two games where I was struggling.”

“It was really fun to watch her bowl all week,” said O’Keefe. “It was great to see her grow in her comfort level with each round and she really battled well out there. That has always been one of her dreams to see her accomplish that was truly special.”

With the qualifying tournament now complete, Dunn will shift her focus back to the lanes for McKendree. She helped spark the Bearcats to their first-ever NCAA regular-season event championship back in November at the Crusader Classic. Dunn earned All-Tournament honors by finishing sixth overall at the event with a 221.2 average. McKendree will resume its season Jan. 15-17 at the Mid-Winter Invitational hosted by Arkansas State University in Jonesboro, Ark.