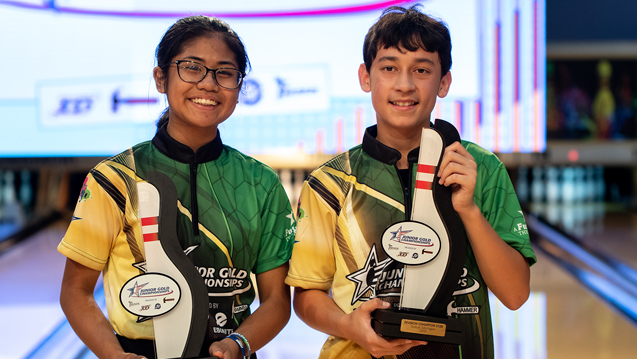 bowl.com
ALLEN PARK, Mich. – Katelyn Abigania of San Diego successfully defended her U12 girls title and her USA Bowling teammate, Elias O’Hollaren of San Diego, won the U12 boys title at the 2019 Junior Gold Championships presented by the Brands of Ebonite International.

Both Katelyn and Elias were the No. 3 seeds in the championship rounds that aired Tuesday on CBS Sports Network from Thunderbowl Lanes.

Not only did each have to win two matches on the TV show, but both had to defeat the opponent who sent them to the elimination bracket during match play.

“It’s amazing, I’m just kind of speechless right now,” Katelyn said after her victory. “Coming into this tournament, with high expectations and a lot of pressure on me, I definitely pulled it off, especially for me being only 12. And now, winning back to back … (two-time Junior Gold champion) Solomon (Salama) is like 16 now, and he’s doing big stuff, so I can’t wait to see what’s in my future.”

Katelyn was the top qualifier for match play, but lost her second match in the bracket to Abby Starkey of Schaumburg, Illinois, 379-359, in the two-game total-pins match. Katelyn then had to win two matches to earn the No. 3 seed for the televised finals.

In the opening match against Gianna Brandolino of Joliet, Illinois, Katelyn trailed by 15 pins through seven frames. But Gianna suffered a 7-10 split in the eighth frame and then missed a single-pin spare to open the door for Katelyn, who stayed clean for a 180-174 victory.

“Like last year, I said it’s never over until the game’s actually over,” Katelyn said. “I thought I was going to lose the first match. And during match play, since I lost my second match, I thought it was over but here I am again.”

In the title match, Katelyn had a rematch against Abby.

Abby could not convert spares in the first, fourth and fifth frames, and though Katelyn did miss a single-pin spare in the fourth frame, she also had three strikes in the first five frames to build a 26-pin lead. She would stay clean the rest of the game, including striking out in the final frame, for a 196-147 victory.

In the boys final, Elias followed his USA Bowling teammate’s lead, winning the title as the No. 3 seed. Elias and Katelyn are on the SDLV team in the USA Bowling National Championships.

In the match-play bracket, Elias lost his opening match to Duke Knudsen of Redmond, Washington. But Elias also made it back through the elimination bracket to claim the title.

In his opening TV match against Braden McDonough of Coppell, Texas, Elias strung together three strikes, starting in the third frame, to build a 32-pin lead and would go on to take a 200-168 victory.

Elias then faced Duke again, this time with the national title on the line.

Trailing by three pins through seven frames, Elias watched Duke trip a 4 pin for a strike in the eighth frame. In the ninth, Knudson was able to convert his 2-4-5-8 leave, but it left the door open for Elias.

He struck in the ninth and then posted strikes on his first two shots in the final frame to take the title, 211-197.

“I didn’t know he was going to miss in the ninth, so I was just thinking to put pressure on him, make him have to double in the 10th to win,” Elias said when asked his thoughts heading into the final frames. “And then he missed, and I was like, ‘I can shut him out now.’”

Competitors in the U12 division bowled 16 qualifying games over four days (four games each day) before the field was cut. The advancers then bowled an additional four games to trim the field to the top eight boys and top eight girls for match play.

Match play was a double-elimination bracket consisting of two games with total pinfall determining the winner.

BowlTV.com provided live coverage of the Junior Gold Championships from selected centers, including coverage of U12 match play.

CBS Sports Network is broadcasting the stepladder finals of all divisions of the 2019 Junior Gold Championships. The U15 finals will air July 30, the U17 title matches will be broadcast Aug. 6, and the U20 finals will air Aug. 13. All TV shows will start at 8 p.m. Eastern.