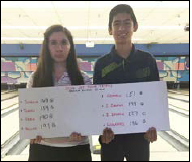 The Tour Trials presented a tough challenge, with all bowlers rolling 20 games on four different lane conditions over the two days. Much like the Olympics 100 meters, the finals consisted of the top eight bowlers all competing in one game for the gold. Julian rolled a 227 in the finals to capture the title. Stephanie, on break from Sam Houston State where she bowls for the Bearkats, finished second with a 199. Congratulations to both!

Julian and Stephanie are alumni from the JAT Sport Junior league at Keystones Lanes which starts again September 10th (Saturday) at 11:30 a.m. (meeting; bowl at noon).

The league will consist of four eight-week rounds that provide an opportunity for juniors to qualify for the 2017 Jr Gold Championships to be held July 15-21 in Cleveland. Juniors will bowl four games on sport lane conditions and the cost is only $13 per week.