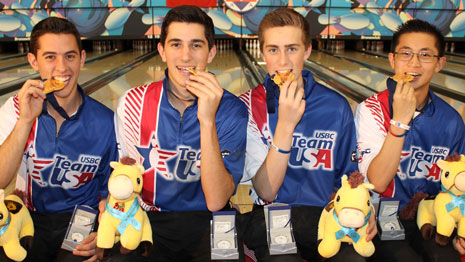 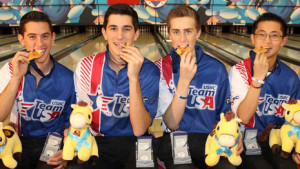 Wesley Low and his Junior Team USA teammates were able to capitalize on early mistakes by Malaysia and rolled unchallenged to an 812-735 victory live on BowlTV. They successfully defended the program’s 2012 title in Bangkok, Thailand.

The gold medalists first found success together at the 2013 Pan American Bowling Confederation Youth Championships, where they also won the team event, and they drew on that experience in Hong Kong.

“After PABCON, we didn’t know if we’d get to travel together again for the World Championships, so to come here together, win again and defend the title for the 2012 team is surreal,” Low said. “We had an early advantage today and just didn’t want to let up or give them a chance to come back. As the week went on, we kept getting stronger as a team, and that really showed today.”

In the girls gold-medal match, Japan and Sweden both struggled at different points of the game, but a late rally from Japan gave anchor Kana Shimoide a chance to win with two strikes and nine pins in the final frame.

After getting the double, Shimoide’s final offering drifted high, nearly leaving the 4-7-10 split, but the 7 and 10 pins fell late to secure the 784-783 win.

Japan’s road to the final included a less-dramatic, 750-685, win over Finland. All of the fireworks came in Sweden’s semifinal win against the United States, the defending girls champion. Sweden anchor Jenny Wegner struck on the first shot of the 10th frame to lift her team to an 838-821 win.

Japan and England each earned bronze medals in the boys team event, and Finland and Junior Team USA shared the bronze in the girls division.

All teams bowled three qualifying games on the 45-foot Mexico City lane condition and three on the 35-foot Beijing oil pattern before the field was cut to the top four for the semifinals.

The conclusion of the team event Wednesday also determined the all-events medalists based on their 18-game pinfall totals.

Junior Team USA’s Low claimed the all-events gold medal on the boys side with help from a 300 in his opening game Wednesday. It was the fourth perfect game by a boy, and fifth overall, in World Youth Championships competition. The first was rolled by Team USA’s Tommy Jones at the 1996 event, also in Hong Kong.

“I wasn’t paying attention to the all-events standings at all this week,” said Low, who won the silver medal in singles this week. “I wanted to take it one event at a time and hopefully make the Masters cut, and then take it from there. Today, I was just focused on the team and helping us have a chance to win.”

On the girls side, Shion Izumune of Japan reached the medal round in every event and took home the all-events gold medal with an 18-game total of 3,836, a 213.11 average. Junior Team USA’s Mary Wells and Liz Kuhlkin won the silver and bronze medals with 3,777 and 3,724, respectively.

The field included 262 bowlers from 46 countries, competing in singles, doubles, team, all-events. Singles was contested on the Beijing oil pattern, doubles was bowled on Mexico City and the team event featured three games on each.

Competition continues Thursday with the start of Masters play, which will feature the top 24 boys and top 24 girls in the all-events standings. It took an average of 205.44 to qualify on the boys side and 194.17 for the girls.

All competitors will bowl six games Thursday morning, followed by a cut to the top eight in each division for round-robin match play. Each pair of lanes will have the Mexico City pattern on the left lane and Beijing on the right.

The top four in each category after Friday’s match-play round will advance to the semifinals, scheduled for 1 a.m. EDT.

Bowling fans from around the globe can watch the competition live on BOWL.com’s BowlTV thanks to a partnership between the United States Bowling Congress and the Hong Kong Tenpin Bowling Congress.