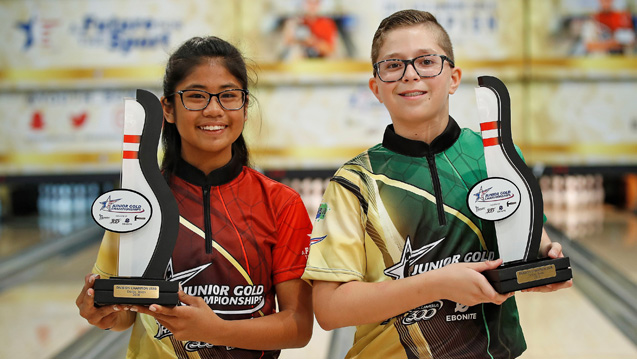 ARLINGTON, Texas – Katelyn Abigania of San Diego, and Joseph Dominguez of Manalapan, New Jersey, each won two matches in the stepladder finals to earn titles in the 12-and-under division at the 2018 Junior Gold Championships presented by the Brands of Ebonite International.

Joseph, 12, won the title as the No. 3 seed in the boys stepladder while Katelyn, 11, had to get past defending champion Karina Capron of Fremont, Nebraska, to take the girls title. CBS Sports Network aired the championship rounds, which moved to the stepladder format this year, on Tuesday.

“I’m very speechless and emotional, because it’s a big thing,” Katelyn said after winning. “I’m trying to keep my tears in, but I feel really happy for myself. I want to thank my family and my coach and my friends for getting me where I am right now.”

In the girls title match, Katelyn faced Karina, 12, for a second time in two days. Karina earned the top seed for the girls stepladder with a 385-318 victory over Katelyn in match play.

“Karina is amazing at bowling and I didn’t bowl too well,” Katelyn said of their meeting in match play. “I knew I had to step up my game, keep going and don’t give up. I definitely did way better.”

Karina started the title match with a strike, but left splits in frames two and four, and also could not convert a 1-2-8-10 spare in the fifth on the 40-foot lane pattern.

Katelyn, meanwhile, struck four times in her first six frames. Both bowlers opened in the seventh frame, Karina suffering a 6-7 split, while Katelyn was able to hold a 38-pin lead despite missing a 4-pin spare attempt.

Katelyn stepped up in the 10th needing seven pins to close out Karina, and delivered three consecutive strikes to claim a 200-159 victory and the title.

In the opening match, Katelyn started with back-to-back strikes and was able to build an early 33-pin lead against Saphyre Nofuente, 12, of Rocklin, California, who could not convert spare attempts in four of her first five frames.

While Katelyn would strike again in the sixth and seventh frames, she would have back-to-back open frames to leave the door slightly open for Saphyre. Needing two strikes in the 10th to keep her title hopes alive, Saphyre missed on the first attempt as Katelyn took the match, 153-135.

Joseph’s road to the title was a little longer. He lost his opening match in the double-elimination match-play bracket and had to go through the Elimination Bracket just make the TV show.

He admitted he didn’t know he needed to double in the final frame of match play to advance, saying “that’s a good thing, because then it would have put pressure on me.”

Joseph faced Nihal Mareedu, 12, of Union City, California, in the title match. Nihal was on the U12 team that won the USA Bowling National Championships title last year and will bowl in this year’s title match as a member of the Pacific Southwest region team.

In the back-and-forth U12 Junior Gold Championships title match, Joseph held a slim two-pin lead heading into the ninth frame. Nihal left the difficult 4-10 split and could not convert, and Joseph answered with a strike.

Needing a mark and 8 pins in the final frame to clinch the title, Joseph converted a 10 pin for the spare and then struck on his final shot for a 170-155 victory.

“I’m excited and very proud of myself,” Joseph said. “It’s hard to image how far I came (to win). I really just wanted to make my family very proud, to do the best I could.”

Joseph reached the title match with a 199-150 victory over Keegan Alexander, 11, of Victor, New York. Joseph struck in four of his first five frames on the way to the win.

Competitors in all divisions bowled 16 qualifying games over four days (four games each day) before the field was cut. Bowlers in the U12 division bowled an additional four games in the advancers round after the cut, and the field then was trimmed to the top eight boys and top eight girls for the double-elimination match-play bracket.

All advancers and match-play rounds leading up to the televised finals were broadcast live on BowlTV.

The city of Dallas and the Dallas Sports Commission were hosts for the 2018 Junior Gold Championships.