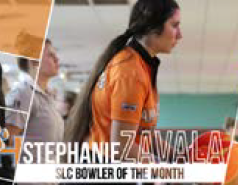 FRISCO, TX – Sam Houston State senior is the Southland Bowler of the Month for January, the league announced Wednesday. Southland monthly awards are presented by UniversalCoin.com.

Stephanie is the daughter of Armando Zavala bowling family of Downey.

Zavala posted a 218 average for the month of January, helping the Bearkats to a pair of top finishes, including a third place finish at the 27-team Kutztown Invitational. At Kutztown she was named to the All-Tournament First Team with a 226.4 average, placing fifth individually out of 171 competitors. She registered a 200-plus total pinfall in 4 of her 5 games with a high game of 255.  “Stephanie has been our most consistent bowler this month,”  said head coach Brad Hagen. “We made some changes to the lineup and moved her to the No. 4 spot and she has really responded.”

She also had a top-20 finish at Arkansas State’s Mid-Winter Invitational, placing 18th overall out of 113. For January, she led the Southland Bowling League with a 22.01 overall average per frame.

Congratulations from the Bowling News and looking forward to more stories about Steph!