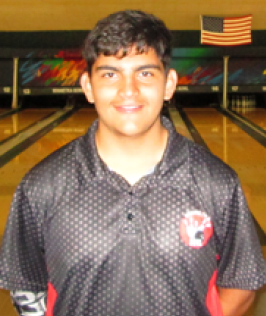 WINNETKA – Ardani Rodas is generating considerable attention in the Winnetka Bowl youth league. Ardani blasted his first 300 and 800 series on the same morning last month, blasting an 812 with scores of 267, 245 and 300.

And he just turned 15 in January.  It was an effort that triggered memories of Justin Pluchino, who graduated from the same Winnetka youth league two years ago with star potential . . . and has continued his success at the adult level.

“It was very exciting,”

said North Hollywood’s Ardani, who just happens to be coached by Pluchino as well as Winnetka Bowl employee Daniel Giegoldt. “My 11th ball [in the third game] was a Brooklyn. I was scared.”

Ardani, a right-hander with a fluid release, started in the Winnetka youth league as a 180 bowler. He’s raised his average to a powerful 220 a year-and-a-half later.

Ardani already has won a youth tournament title and would like to win more. He also would like to give pro bowling a shot. Ardani, a shot-putter on his high school’s track and field team, seems to have the mental discipline

to maintain his skyward direction. “He’s a hard worker and a good listener,” Giegoldt says. “He doesn’t get frustrated when he misses a shot. He doesn’t do anything too fancy. He doesn’t try to overpower the lanes.”

For his part, Ardani remains calm to all the attention he’s receiving. But he knows he’s found his niche. “I love it,” he says about bowling. It’s fun.