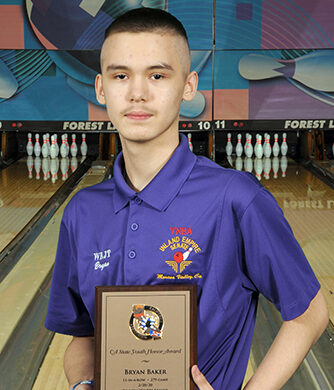 REDLANDS – At  the age of 13 Bryan  Baker has been Bowling for over a decade.  Yes, he started bowling two handed at the tender age of 2 years!  He may be the youngest bowler ever and he hasn’t stopped knocking down pins since his “bowling genesis”.   Yes BOWLING GENESIS.  Every bowler has a genesis along with a “BOWLING ENLIGHTENMENT”.  A bowler’s enlightenment occurs when they learn to become a proficient bowler.

Bryan began bowling at Fontana Foothill Lanes (now Bowlero Fontana) because his father, STONEY BAKER,  bowled in league there.  Hey, “ACORNS AND NUTS NEVER DROP FAR FROM THE TREE”.  With his dad being a great bowler, regularly averaging 220 with multiple 300 games, you would expect Bryan  to be the same and he is. A great bowler.

While  a few junior bowlers have rolled perfect 300 games at Empire Bowl,  Bryan is believed to be the first to roll a 800 series. His  800 (300-279-211) rolled on 11/20/21 is believed to be the record high series for an Empire Bowl junior kegler.  Bryan used a Storm Dark Code to roll his honor scores.  It’s his favorite bowling ball because it’s smooth roll and rotation has resulted in his highest scores.  Quoting Bryan “that ball always comes back hard when you roll it correctly”.

Bryan’s  secret to rolling strings of strikes is to focus on  one shot at a time. Focus on each shot as if it is the first frame of the game.  Also,  don’t dwell on the possibility of a high score, instead distract your mind with other thoughts between those championship frames.

How does a  young bowler like Bryan Baker possess wisdom beyond his  years?  Bryan speaking  of focus, mind control and mental distraction is amazing when you know that he is only thirteen years old.  I think the sport of BOWLING is responsible for such early maturity.  Competitive bowling teaches a variety of “survival skills” such as mental concentration, mental acuity and the recognition for mental and physical adjustments.

Bryan’s favorite professional bowler is OSKU PALERMA because he helped revolutionize the sport of Bowling by being one of the  first professionals to introduce the two handed style to the world.  Palerma is probably the greatest bowler ever to come from Finland.  He shocked the Bowling World when he made the television stepladder finals at the 2002 U.S. OPEN and just missed winning the title, losing to WALTER RAY WILLIAMS JR. by just a few pins.

Bryan, like his dad, loves our sport because of the comradeship  existing among bowlers.  He loves being around other bowlers. Bowlers are the best people in the world and they’re fun to be around. Also, the electric atmosphere surrounding tournament competition gives a bowler that “BUZZ” sometimes referred to as “BOWLERS HIGH”.  It is a sensation experienced in very few other activities. Bryan is learning to love that “BUZZ”.

Bryan  has been a proud member of the THE NATIONAL BOWLING ASSOCIATION (TNBA) for four years now.  He loves volunteering at the TNBA Inland Empire Senate Junior Program.  He enjoys helping other junior bowlers improve their bowling game. His participation as a “junior coach” demonstrates that Bryan appreciates what his Bowling mentors and the sport of Bowling have given him and his willingness to give to others.  Outstanding work Bryan. Unlike yourself, many  adults have not learned that “HAPPINESS IS ROOTED IN GIVING”.

If Bryan doesn’t succeed as a professional bowler he would like to be an astrophysicist or a politician. A fellow named WERNER VON BRAUN of NASA fame would be impressed.  Besides setting Bowling records Bryan has also scored the second highest Mathematics score at Martin Luther King Junior Middle School’s MWEA growth assessment program.  Again, outstanding work Bryan.  Unlike many adults, you are aware that “LIFE’S DREAMS DON’T ALWAYS COME TRUE”.  You already recognize that your dream to become a professional bowler may not materialize.  Your success as a mathematics student show that you are preparing for life after Bowling and life as an astrophysicist or politician.

Bryan is GRATEFUL  to his EMPIRE BOWL and TNBA coaches ART GUZMAN, TERRY LANKSTER and MIKE RADDEMAN  for making him a better bowler.  He is especially grateful to his father Stoney  for being his number one coach and mentor. Stoney has spent numerous hours coaching his son.  Bryan realizes that his success is the product of hard work both by himself and his coaches. Outstanding Bryan.  At a young age you are aware that “SUCCESS IS THE PRODUCT OF HARD WORK” and that “WE ALL STAND ON THE SHOULDERS OF OUR PREDECESSORS AND MENTORS”.  Many adults never learn these life lessons with sometimes tragic results.

Bryan Baker is a record setting junior bowler, mature beyond his years, destined for a lifetime of success and accomplishment.  Congratulations BRYAN BAKER, you are another example of why “CALIFORNIA BOWLERS ARE THE BEST BOWLERS IN THE WORLD”.