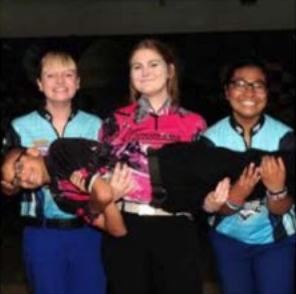 FRESNO – One thing can definitely be said about Jennifer Loredo. She knows how to have fun. The 14-year-old lefthander from Fresno also knows how to bowl.

Jennifer, who “wants to make Team USA one day,” entered this month’s Pepsi event with plenty of momentum. The previous week, she bowled a career-best 289 at the Youth Bowlers Tour at Classic Bowling Center. She struck on her first 10 shots before leaving a seven count on her next shot. Jennifer then converted the spare.

Jennifer, who started bowling competitively four years ago, has a career best series of 727. Now, for the fun part: As the accompanying photo shows, Jennifer knows how to enjoy herself at bowling events. That photo was taken at the NorCal Junior Tournament at Pacific Avenue Bowl in Stockton. Jennifer is shown sharing some hijinks with teammates Amanda Vogt, Sara Nassberg and Domenic Favaloro. The team failed to win a title, but as Jennifer says, “We had a lot of fun and that was the best part.”

Perhaps not surprisingly, Jennifer comes from a bowling family that includes talented brother, Nickolai, 22, and father, Joey David Jr. Jennifer has definitely broken out as a top-tier junior bowler. Asked how she has risen up the ranks so quickly, Jennifer says, “I think it’s just going to tournaments a lot – and lots of practice.”

Next big tournament for Jennifer: a national competition at the Junior Gold Championships in mid-July in Cleveland. One thing is likely: She’ll have lots of fun, win or lose