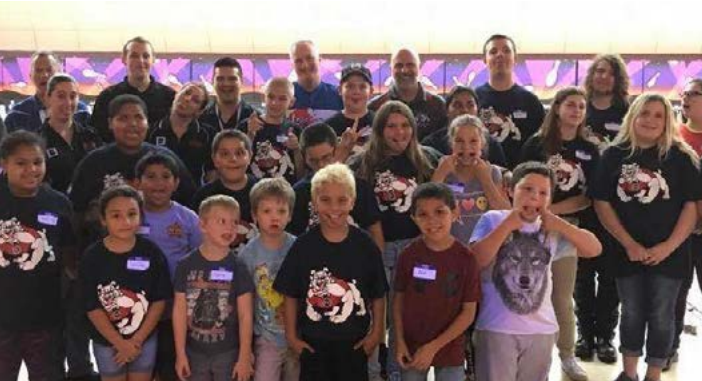 CLOVIS, CA—Central California USBC teamed up with the Fresno State Bulldog Bowling Team to put on their inaugural Learn to Bowl Youth Camp on Sat., July 15 at AMF Rodeo Lanes in Clovis. The idea came from CCUSBC’s newest Director, Kevin Kwok. Then, before they knew it, the Camp became a reality after time for “planning, negotiating with centers, funding, recruiting and execution of the program,” according to CCUSBC Association President Mark Dinubilo. Prior to this actual camp, they conducted four “free” practice sessions in the month of June. The intent of this Camp was to have it open to all junior bowlers who were interested. Dynamic Bowling Industries/Greg Geering came on board to help with this venture by providing the ball/bag/shoe package to participants. And, since Geering is a USBC Silver Coach, he also was one of the volunteer coaches.

The Fresno State Bulldog Bowling Team, headed by Coach Chris Preble, contributed to the planning, recruiting, t-shirts and execution (they provided the coaching elements for both the practice sessions and the Camp). With it now being their offseason, and Summer vacation in full swing, they felt this was the time to get this thing started.

Twenty-four participants came from Fresno, Madera and Bakersfield to do this Camp. The youngest participant was just 7 years old. Out of the 24, approximately 10 of them were youth who did not normally bowl so this Camp had two goals—help the youth that bowl better their game and introduce the youth that have not bowled to be excited about the game and want to learn more to be better. Coaches who worked this Camp include Fresno State Bulldog Coach Chris Preble, Craig Donaldson, Chris Pitts, David Street, Lauren Orgeron, Chris Davidson, Phil Chow, Kiel Jordan, Talia St. Angelo and Tom Barnhard. Bakersfield (Golden Empire USBC) Youth Coach Phil Chow said, “The camp was a lot of fun and ran really well. The Fresno State coaches are great and were amazing with the kids. Coach Preble and Craig Donaldson are two great examples of how to run a camp. The rest of the volunteers did an excellent job with the kids as well. Mark Dinubilo did a fantastic job keeping everything moving forward and on time!”

The Camp was six hours long and included a lunch that CCUSBC provided for all participants and coaches. Ten coaches were on hand for the Camp. There were several ways a child could sign up for this Camp. It was $45 for the Camp only or they could pay $150 and get the Camp plus a Rhino ball (drilled), shoes and a bag. Half the juniors did the Camp only and half did the ball package. Participants were on the lanes for three hours while the balance of the time was spent in off-lane drills designed to highlight the fundamentals of the game. Bakersfield/Golden Empire USBC Parent, Stephanie Sanders who brought her daughter, Kira, to this camp said, “I saw close up and personal fundamental instruction. There were quite a few coaches so the kids got a lot of one-on-one which builds the confidence in kids. It looked like the kids were having fun while learning new things. I’m glad there will be more to come. Can’t wait for the tournament at the end of this month (July 29).” And Camp Participant, Kira Sanders, 17, added, “I learned a lot from great coaches. I learned better balance and stance in my form and what I should be practicing on to get better. The camp was a lot of fun and a great experience.”

When asked if the coaches felt the satisfaction of improvement from the participants, Coach Preble said, “Yes, several of the youth bowlers showed improvement during the camp. More importantly, our focus was to provide these young people with the fundamentals needed to build their games. Each of the participants left with a good idea on what they need to focus on going forward.” When asked for his take on what this event and what it means to the Fresno Bulldog Bowling Team, Coach Preble added, “Well right now the camp served as another way of getting our program and its coaches recognized by the youth bowlers in the Central Valley. We probably won’t see an immediate impact from a Learn to Bowl Camp with our program; however, it’s a bit like a conversation—you can’t get to know someone if you don’t start having one!”

Speaking of the Fresno State Bulldog Bowling Team, it is recognized as one of the most active bowling teams now in California. Although there are also bowling teams at three other universities in California (San Jose State, UC Davis and Cal Poly) that are similar in size, Fresno State has traditionally fielded both Men’s and Women’s teams while other schools have focused on Men and Mixed teams. “The Fresno State Bowling Program was founded in 1969 by head coach Glenn Carlson. Coach Carlson laid down a foundation based on teaching the fundamentals of the game and competing with integrity and class. We’ve been dedicated to continuing his vision since his passing in 2008,” said Coach Chris Preble. When asked if a youth bowler ready to enroll at Fresno State this fall could still try out for the bowling team now, Coach Preble said, “with school starting next month, it is unlikely students could be accepted this Fall semester. However, if someone is interested he/she could reach out to Coach Preble immediately (bowldogcoach@comcast.net).” Fresno State will be holding tryouts for its 2017-18 team Sept. 8-9 and Sept. 15-16 at its on-campus center.

Mark Dinubilo and CCUSBC should feel major satisfaction for providing this Camp and engaging the Fresno Bulldog Bowling Team and its alumni. What a success it was! Dinubilo stated, “The CCUSBC is committed to doing this on an annual basis for the next eight years. I have prepared multiple youth events for the next eight years to take to our first board meeting in early August. The youth program will be my main focus as long as I hold the office as President. My current term is up in 2019. We learned quite a bit in our first go-round. Our after-event meeting brought up a few areas that can be improved. The biggest probably being an age-based camp. We were asking a lot of the younger kids to fulfill that long of a camp (some of the 7 and 8-year olds were a little tired come 4pm!).”

And now on to their next event, the CCUSBC Youth Championship Tournament which is taking place on Sat., July 29th starting at 11am at AMF Rodeo Lanes in Clovis. Youth Camp participants are eligible to bowl and other youths are welcome as well. If you are interested, please call Mark Dinubilo at (559) 970-7245 to get registered. For further info on CCUSBC and their upcoming activities, the Central California USBC and Central California USBC Youth are on Facebook. CCUSBC.com is their website, and they are on Twitter @ CCUSBC@centralcalusbc.

The California Bowling Writers (CBW) was formed in 1998; membership is open to all California bowling journalists, promoters and supporters of the sport of bowling. The purpose of the organization is to encourage and educate both members and non-members in communication through print, promotion and use of electronic media, recognize and reward those who create media awareness by providing outstanding journalistic excellence. For more information, visit: http://www.calbowlingwriters.org or like California Bowling Writers on Facebook.