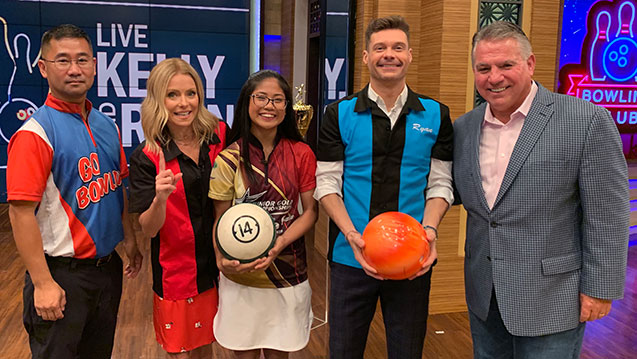 ARLINGTON, Texas – When Katelyn Abigania of San Diego claimed the girls 12-and-under title at the 2018 Junior Gold Championships presented by the Brands of Ebonite International, she was told her life was about to change.

Her father, Jonathan, was told the same thing, and even in the hustle and bustle of TV day at the premier event for United States Bowling Congress Youth members, it’s something that stuck with him, especially in the days and weeks that followed.

It didn’t take long for the interview requests to begin rolling in, and local reporters even visited Katelyn at her school.

As she prepares to head to the Detroit area to defend her title at the 2019 Junior Gold Championships, one last interview opportunity landed her on the nationally syndicated “LIVE with Kelly and Ryan” as part of the show’s Lil’ Champions Week.

Katelyn’s appearance came on Wednesday morning, and a bowling lane was specially installed in the studio to allow her to show off her skills and give tips to the show’s hosts – Kelly Ripa and Ryan Seacrest.

Other guests for Lil’ Champions Weekincluded the winners of the 2019 Scripp’s National Spelling Bee, a Masterchef Junior Champion and a reigning Raytheon Mathcounts Champion.

“I just wanted everything to flow smoothly, and it did, and I especially didn’t want to throw a gutter on TV,” Katelyn said after her appearance. “I actually was stunned the whole time and couldn’t really believe I was there. The advice I gave them was just to hit their targets, and it worked, for Ryan at least, because he threw a strike.”

Though her recent television appearance wasn’t her first time on national TV, it did mark the first time Katelyn or her father had been to New York City. It was the latest addition to the growing list of places bowling has taken her.

The bright lights and fast pace of Times Square were far different than the sun-soaked streets of San Diego she’s used to, and a wide-eyed Katelyn carefully walked around looking at the many storefronts, billboards and advertisements, making a mental checklist of all the things she wanted to see and do during her few days in the Big Apple.

Prior to arriving, her main goal was to see the Statue of Liberty, and she mentioned early in the trip that she’d long been interested in the hit Broadway show, Hamilton.

With countless other shows and attractions to consider, the only logical thing to do was talk it through over her first slice of authentic New York thin-and-crispy-crusted pizza. Folded.

“New York is so pretty, and everything is so big and crowded and luxurious, but I couldn’t imagine living in a city like this,” Katelyn said. “I’ve gotten to see so many cool places, and I found out from traveling for bowling that I love seeing new places. Now, whenever I go out of my hometown, it’s also like a vacation to me. Even if the bowling can be stressful, I still try to enjoy the vacation part of it.”

Through all the excitement over the past year, even in the blinding sparkle of New York City, he has reminded Katelyn and her two brothers to remain humble and grateful and gracious on the lanes, in victory and defeat.

“Before my daughter even went on TV as the No. 2 player, we were told her life was going to change, but at that time, I wasn’t really able to process it,” Jonathan Abigania said. “We’ve been seeing it since, with the TV viewings and different opportunities, but even while it’s happening, it’s sometimes still hard to process. This trip right here has been a great experience for me and Katelyn, and we feel so blessed and appreciative for the chance to be in New York and on the show.”

Bowling is something the retired U.S. Marine started doing just for fun, but it has turned into a family passion, full of disciplined practices and long car rides to tournaments and other events.

Along with Katelyn trying to defend her title at the 2019 Junior Gold Championships, plus find success at the Bowling.com Youth Open Championships and help her team win a national title at the USA Bowling National Championships presented by Sixlets, her 14-year-old brother Joshua also will be among the more than 4,000 young bowlers competing in eight Detroit-area bowling centers next month.

“We started bowling as a family, but just for fun, and the kids made it into a sport,” Abigania said. “We trained and trained, and being here today is a result of that. I believe they have what it takes, and if they continue working hard, I think they can accomplish even more.”

Ultimately, for right now at least, Katelyn would like to find similar success on the Professional Women’s Bowling Association Tour. Among the PWBA Tour stars she looks up to are Poland’s Daria Pajak and New York’s Danielle McEwan.

Oh, and Josie Barnes of Nashville, Tennessee, a three-time PWBA Tour champion and the associate head women’s bowling coach at Vanderbilt University, the school Katelyn would like to attend to prepare her for her backup career as a prosecuting attorney.

“It has been a long and stressful year at times since winning at Junior Gold, but I’m very thankful for all of it,” Katelyn said. “If this is the beginning of who I am and what I want to do, then I’m already on a good path. I’d like to compete on the PWBA Tour someday, and that might change, but for now, that’s a goal. And being on Team USA.”

The 2019 USA Bowling National Championships will be the first national event of the summer for Katelyn, as competition gets underway July 11. Her four-player team won one of the 16 regional qualifiers. The victory came in Las Vegas in February.

The 2019 Youth Open Championships will run over three weekends in July, and qualifying at the Junior Gold Championships will begin July 15. The event again will conclude on CBS Sports Network, as champions are crowned in four age-based categories (girls and boys in each) – U12, U15, U17 and U20.

“I think I’m prepared, but I’m going to go home and work some more on spare shooting and target hitting and make sure I’m ready to do the best I can in Detroit,” Katelyn said. “This past year has been a lot of fun, but it’s important to keep working hard and trying to get better. I’m excited to defend my title, and it’s my last time in U12, so I want to do well again.”

In last year’s three-player stepladder final, Katelyn won a 153-135 nail-biter against Saphyre Nofuente of Rocklin, California, and then went on to top Karina, 200-159, in the championship match.